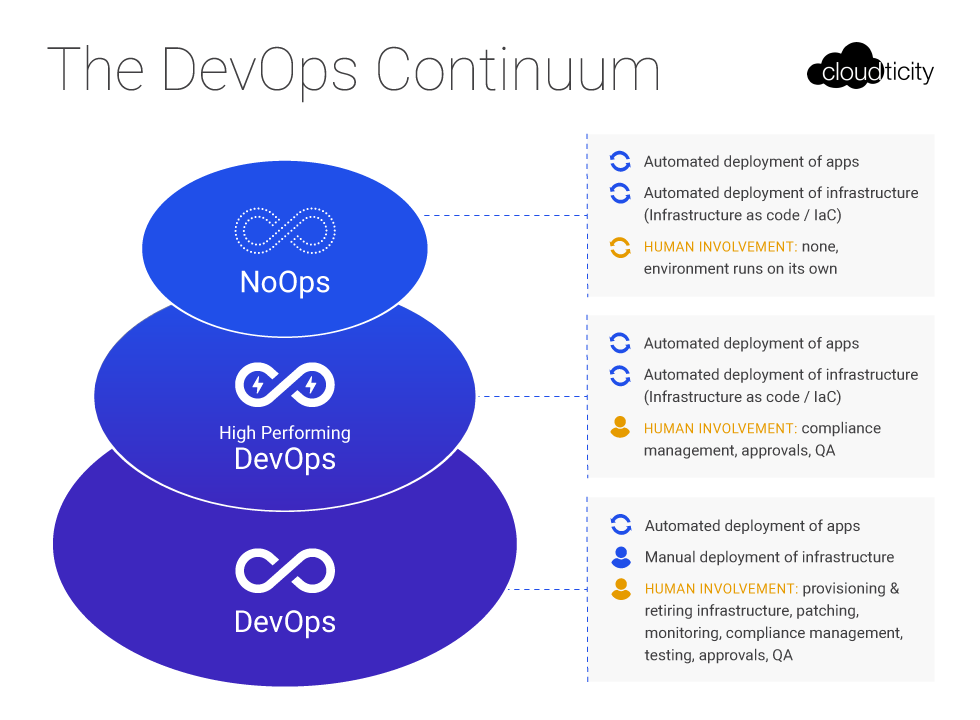 Cloud computing has paved the way for a new generation of faster software development and deployment, known as DevOps. Healthcare organizations leverage DevOps to improve security, agility, efficiency, and to deliver software faster.

Here at Cloudticity, we classify DevOps into 3 main levels of maturity: 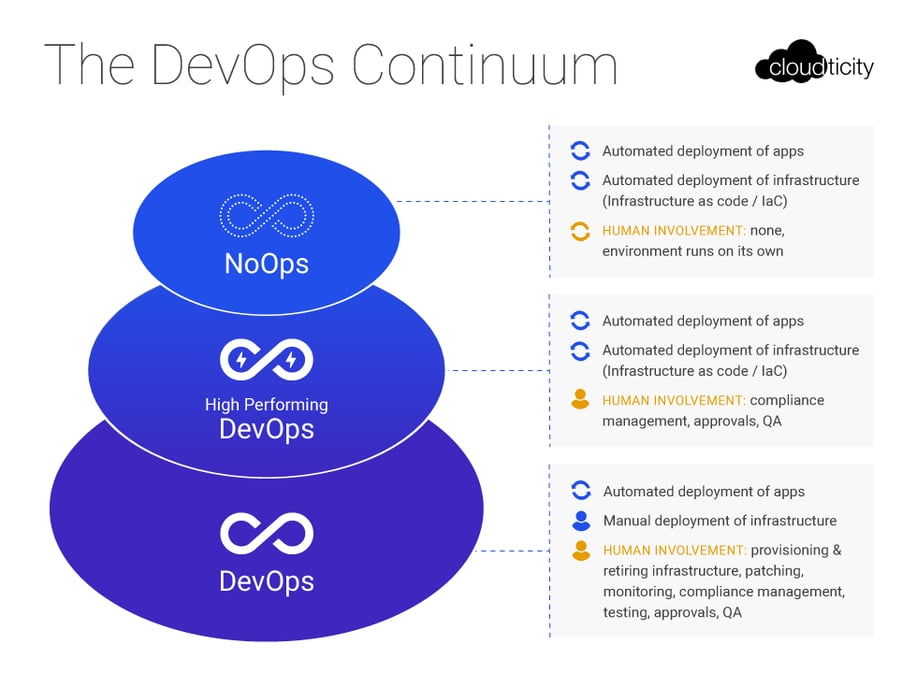 The highest progression of DevOps is known as NoOps, a term originally coined by Forrester in 2011. NoOps is an ideal state where both application development and infrastructure are fully automated, allowing developers to move even faster and more securely.

The Journey to NoOps

To put this into context, let’s take a step back and talk about how we got here. The traditional method for software development is the waterfall methodology, which uses a linear approach that outlines all the stages in the software development process ahead of time. It’s characterized by rigidity, fixed requirements, with development and operations teams each in their own silo.

As our workflows evolved, Agile methodology hit the scene. By focusing on flexibility, iteration, and interdisciplinary collaboration involving all stakeholders, Agile revolutionized how we build software.

Then came DevOps, the next evolution of Agile for software development. DevOps widens Agile's principles to include systems and operations by encouraging close cooperation between development and operations teams during the entire SDLC. It solves the problems with previous methodologies by evolving and improving products at a faster pace, resulting in a 25 -30% increase in capacity creation, a 50-75% reduction in time to market, and a greater than 50% reduction in failure rates.

Two DevOps practices in particular have had an enormous impact and set the stage for the next evolution of software development. First is CI/CD, Continuous Integration and Continuous Delivery. The former requires developers to merge code changes to a central repository many times per day and is a prerequisite for Continuous Delivery, which automates the entire software release process.

Simply put, DevOps teams use CI/CD to deliver software with less risk, to improve developer productivity, to deliver products that users require, and to release new features on a more frequent basis. In fact, research shows that the highest performing DevOps teams use tactics like CI/CD to make on-demand deployments multiple times per day, reduce change lead times to under one hour, restore services in under one hour, and minimize change failure rates to between 0-15%.

The second practice is Infrastructure as Code (IaC). Rather than relying on operations administrators to configure and manage hardware, today’s companies can automate this entire process in a cloud environment.

Cloud offers highly elastic infrastructure; since users pay based on the amount of resources they use, developers often find themselves spinning up and shutting down virtual machines (VMs) on a regular basis, sometimes multiple times within the span of a single day. Because of this elasticity, experimentation is of relatively low risk and low cost to companies, allowing them to be more innovative and test more features in the cloud.

Here’s where things get interesting: rather than provisioning infrastructure individually, DevOps teams simply write code that can continuously create identical environments, which they can then use to test and push out application code in the CI/CD pipeline and to deliver stable environments quickly and at scale.

The Future of DevOps is NoOps

In our steady march towards increased automation and all the benefits it brings, we arrive at the next step in our journey: NoOps. In a word, NoOps means that our IT environments can become so automated that we no longer need operations teams to perform deployment, monitoring, and management tasks.

"Why should a human have to look at a screen to see if the server is patched? We believe that’s a waste of a valuable human." –Gerry Miller, Founder & CEO, Cloudticity

This is going one step beyond automating application deployment and infrastructure provisioning. NoOps allows us to automate the processes required to keep our software up and running security. With NoOps, the environment runs by itself.

The Impact of NoOps on Healthcare

As organizations perfect their DevOps processes, they move closer to the ideal state of NoOps.

Some may worry that practices like NoOps seek to replace humans by automating them out of a job, but that’s not the case. Instead, NoOps empowers humans to spend all of their time doing meaningful work – like creating innovative healthcare solutions that solve critical healthcare problems.

The more organizations leverage autonomous infrastructure, the faster we can bridge gaps in our healthcare system to create a healthier world.

Here at Cloudticity, we leverage NoOps practices to deliver 97% autonomous cloud infrastructure to our clients. They don’t have to slow down to worry about compliance management, patching, backups, or infrastructure provisioning and retiring. Rather, they can allocate all their IT resources to building their product and making healthcare better.

Schedule a free consultation to learn how our automated managed cloud services can help your company accelerate growth.